How I caught a fish on another line! 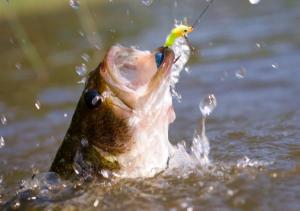 iT WAS AT LEAST THIS BIG

My brother and I were fishing in our town pond on evening in the summer of 2010. I had already caught a 1.5 lbs bass and was trying really hard to catch another one. It wasn't until we took our boat over by the edge of what seemed like a never ending section of lily pads. I made a decent cast and felt a bite, so instinctively I set the hook and reeled it in. My brother grabbed the net and scooped up the fish, and told me to grab the pliers because the fish had swallowed the grub I was using. However, I saw the grub sill on my line, as if it had slipped off the hook and up about a foot on to the fishing line. That’s when my brother noticed that the hook was still in the grub, and that I had hooked the end of a loop of another hook that the fish had swallowed sometime before.