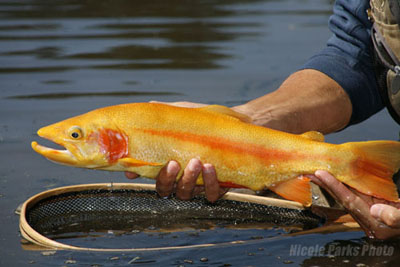 I visited my son in Arkansas this month and he took me to our favorite fishing hole on the Little Red River on August 21st, 2010. After catching and releasing several 12 - 15" Rainbows he had another bite! This was something very different, it looked like a trout but it was bright yellow with about a 4" pink patch on its sides. What was it? We couldn't figure it out! I took a picture with the last available disposable camera in the boat rental office and my son, Jessey released it. It was the brightest yellow, like a Canary! On our ride back to his house we were so tired but also so excited about the strange catch. Jessey called his friend who was a very involved fisherman and his friend just about jumped threw the phone, "It was a Golden Trout"!! It's very rare and only one other catch has been recorded on the "little Red" and we released it back to the wild. At least we have our story and the picture to back it up.
What a golden day!