My buddies told me "your doing it wrong!" three minutes later... 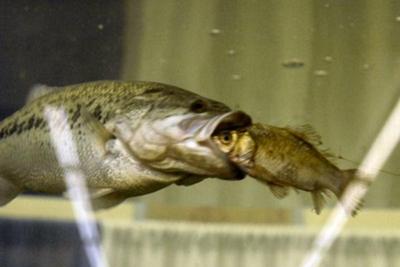 My two buddies and I went on a late evening fishing trip down at the local lake. It was my first time fishing so late in the day and in a boat, so I was pretty excited. We unpacked our gear and rowed out about 300ft and dropped the weight. Horizontal to us was some rocks, and reeds, and about 50ft away was some shore. Since I didn't have my own gear I had to borrow one of the guys childrens' old rod. You know, the one with the button to release and the small hook that hasn't been changed out since they were 15 type deal. But I wasn't going to complain because I was used to that kind of rod anyway. The guys started joking around at me saying "oh, would like a bobber to go with that rod" and I proudly responded "yes, I would." So they hand over a snoopy shaped bobber and the thing of worms and told me "yah, good luck catching anything with that." I ignored them and cast out, away from the shore, towards the middle of the lake. I told them "you'll see, I'll be the first one to catch a bass." Then one of the guys remarks, "Yah, right, your not going to catch a bass, your doing it wrong." The only thing you're probably going to catch is a sunfish." I knew he was right, but I still was optimistic. I waited a few minutes with the rod in my lap as I opened my drink, took a sip and slowly reeled in to tighten the line a bit. not even a moment had passed when snoopy goes under with a splash. I think to myself, awe crap, I caught a log or something, so I jerk upwards and start to reel. I couldn't see snoopy so I jerk again and start to reel more. The line wasn't stuck I knew that much, but I still wasn't sure I had a fish because usually, in my experience (which isn't much), the bobber would have still popped back up to the surface. I started complaining to the guys that I thought I may have gotten it really stuck. They didn't really say anything back to me, so I stopped reeling for a moment because the rod was arching really bad and I didn't want to strain or break the line. in a moment, snoopy came back up then shot back down and the line started to pull. That's when I realized I had a fish. I told the guys and they begun to pay attention a little but still didn't believe it, "if you have a fish, it's probably not that big." I wasn't so sure he knew exactly what he was talking about, because as it got close to the boat I saw snoopy jerking around under the water and my rod was going in with it. That's when I got worried and asked for their attention. "What's wrong you can't pull in a fish?" At that, I reeled in 'till the fish was next to the boat and pulled on the actual rod 'neck' if you will, to lift the fish out of the water. Our jaws just dropped. Not only did I end up bagging a fish with a child's rod, bobber, worm and by casting in the wrong direction, but It was also the biggest fish we have ever seen out of that pond. Heck it was the biggest Widemouth Bass we have ever seen personally. The guys were shock struck and couldn't believe I had just pulled off the catch of the night within ten minutes of being at the lake. Needless to say I think they were more proud of the fish then I was. His total weight was around 6 lbs and if I were to have waited any longer or jerked one more time I would have lost him. That hook I mentioned, was not only not lodged in the fish, but it had snapped in half as he was lowered in the boat. After that night though, I don't think my buddies are going to take me fishing with them any more.